What is the best APN Settings for AT&T?

A lot of folks are asking us what is the best APN Settings they should use for AT&T?  Well, the answer is: it depends!  We say that because it depends on the phone you have and

There are a few different versions of APN Settings you can you on AT&T, it has a few variations based on the technology your phone supports, whether it’s LTE capable or only 3G and if you are running on AT&T native service or though one of it’s MVNO (e. g. Straight Talk, Pure Talk, Cricket Wireless, etc.).

In this post we will only be focusing on the APN’s for direct AT&T Customers.  We will show you the different versions and a brief description about them.

What are the different APN Settings for AT&T

wap.cingular:  This is one of the most common one, used back from the old times where only gprs and 3G network existed, this should work for most legacy phones.  If you have a new generation phone (e. g. Galaxy S5 and up, HTC M8s etc.) you should not use this one.

Phone. The AT&T Phone APN is a general APN for all smartphones.  This should work fine with most of the phones.

PTA.  The PTA option is very similar to the Phone.  This is the old value that was used by AT&T, they were supposed to be replacing it the “Phone” and eventually it will no longer work.  We still are seeing a lot of users using the PTA AT&T APN Settings nowadays, and it doesn’t seem to be removed soon.

Nxtgenphone.  This means next generation phones, it’s the latest one released by ATT.  The nxtgenphone ATT APN Settings should be used on all newer, LTE capable phones.  It offers fastest speed over the 4G LTE network.  You will still be able to use your mobile data on areas that only support 3G. 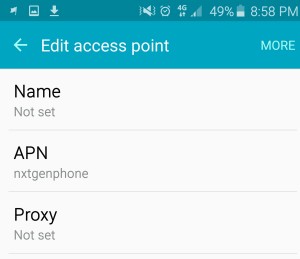 Now that we have given you an overview of all APN’s versions, you might say it’s obvious that the nxtgenphone apn is the best one, given you own a modern LTE smartphone, otherwise you should pick the other ones that best work for your phone.

Should you have any further question regarding this, please drop a us a message below.  If you want to learn more about the technical part of these APN’s, you can check the ATT APN Developer page.